Garden of One Thousand Buddhas 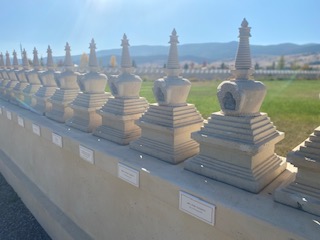 I had read about this place a while back and have been wanting to visit ever since. It sounded like a hidden gem which is something I am always in search of. The Ewam Garden of One Thousand Buddhas is located approximately seventy miles south of where we are staying. The one hour and twenty minute drive to get there was part of the adventure. We stopped all along Flathead Lake checking for possible fishing spots. We didn’t have any luck but Noah had fun exploring and collecting a couple of very smooth rocks. The cherry orchards along the way with the vast lake as a backdrop was nothing short of breathtaking.

As we reached the bottom of Flathead Lake and continued south to the little town of Arlee, we enjoyed the roadside signs that were written in both English and Salish or Kootenai. The Salish and Kootenai languages use characters and symbols which is quite beautiful. This particular area of Montana is occupied by two major Salish-speaking Tribes – the Salish and the Pend d’Oreilles, and one band of the Kootenai Tribe. The first non-Indian visitors to the Flathead Lake Region didn’t arrive until the 1820’s. As we entered the town of Ronan, we stopped at the Dobson Creek Coffee Company. Alex is a midday coffee drinker and I have come to appreciate a great cup of Chai tea. I’d have to say, this place served up a delicious one! I noticed that the barista had what appeared to be a little bonnet on. This was not the first time I had observed similar attire being worn since we’ve been in this area of Montana. After doing a little research I found that there is a small Amish community in a town near where we stopped. After googling a bit more, I found that there is also a small population of Mennonites and Hutterites in Montana.

From the coffee shop, the Ewam Garden of One Thousand Buddhas was another twenty miles down the road. As we turned the last corner, we saw what appeared to be a secret garden on the horizon. Within a couple minutes we were pulling into the parking lot which was situated a short walking distance from the garden.

Walking through the official entrance was like entering into a different realm. As we strolled by intricate statues, there were several different Buddha quotes engraved on large rocks. These are a couple of my favorites…

“Thousands of candles can be lighted from a single candle, and the life of the candle will not be shortened. Happiness will never be decreased by being shared.”

After walking the grounds, we decided to check out the store that was located a few yards away. The sweet Taiwanese woman working the cash register was on a retreat. She will be staying at the garden for several months before returning to Taiwan. She shared the story of how the garden came to be. I thought it was fascinating that the ten acre piece of land that the garden is situated on is actually nestled in a valley owned by the Confederated Salish and Kootenai Tribes of the Flathead Reservation. I was taken aback by the fact that an Indian tribe with completely different religious beliefs from Buddhists would do such a thing. What an absolutely amazing show of respect. I believe that the purpose of the garden is a direct reflection of this amazing gesture between cultures…

To bring about positive transformation within those who visit, in response to the negativity that exists in the world today.

When we had entered the garden initially, we had noticed a monk up on the hill. The kind Taiwanese woman encouraged us to make the small trek up to where he was working amongst several construction workers. They had recently broke ground on the next phase of the garden. Once we got to the top of the hill, he happily greeted us with a smile.

Even though we celebrated Noah’s birthday with Isaiah and Sydney a few days earlier, our day at the garden was the perfect way to spend his actual birthday. Our faith as Christians doesn’t diminish the beliefs of the millions of non Christians around the world. You can’t truly love others without respecting them first. 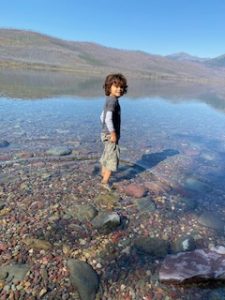 Our time with Zay and Syd 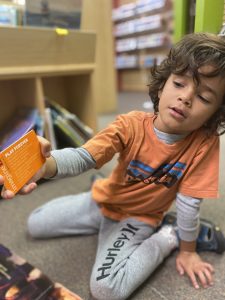 Staying Active and Engaged on the Road