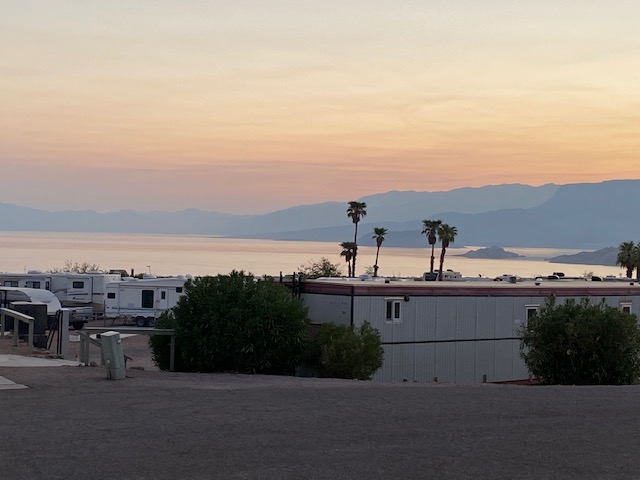 We have just departed from the Willow Bay RV Resort in American Falls, Idaho. We did not have WiFi at the site so I will be blogging via my notebook and then type my post later. We have over 450 miles to our destination in Montana where we will be staying for a month.

Before we started out on our journey north, we stayed at a campsite within Lake Mead National Park in Boulder City Nevada. This cute little spot is only about 8 miles from our home in the town of Henderson. Months before the idea of becoming fulltime RVers was even a thought in our heads, we had committed to hosting a wedding in our backyard for our good friend’s daughter. Lucky for us, when we sold our home back in July, the new owners agreed to let us stay in the house until two days after the September wedding.  On the day before the impending nuptials we were already packed up and most of our belonging  were either in storage or in the RV. We then decided to spend three nights at the Boulder Beach Campground. Throughout my twenty plus years of living in the Las Vegas area I have visited Lake Mead hundreds of times but never as a camper. On the day we departed from the campsite we woke up at sunrise. The view of the lake from our RV doorstep was absolutely breathtaking. The aroma that woke my sense of smell that morning was breakfast cooking several campsites over.  These were two simple reminders of what RV life is all about.

The drive to our next campsite was a whopping 610 miles away! One thing that we learned was, when hauling a 38 foot 5th wheel, you cannot go by the estimated time of arrival on the maps app. What we thought would be a 9 hour drive, turned into over an 11 hour drive! Needless to say, we pulled into the Willow Bay Resort in American Falls, Idaho after dark. Despite the smoky skies on our drive up, I was in disbelief when I looked up into the night sky. I don’t think I have ever seen so many stars at one time. This was yet another reminder of those magical moments, complimentary of RV life.  After hooking up to our site, we entered our home on wheels only to find a couple more examples of what to expect when you set out on an RVing adventure. One of the pantry shelves had completely collapsed, sending cans of food everywhere. As I walked into the bedroom, the clothes that I had neatly folded and placed ever so carefully on the closet shelves, were now in a giant pile on the floor.  Apparently the shelves could not support the weight of the clothes. Prior to purchasing our RV, we were told that things are going to break and to always keep a large bag of tools handy. It was just a couple days in to our trip and that bag of tools was already coming in handy. Despite all the faulty shelving, our first night outside of the state of Nevada went smoothly.

It felt so good to wake up the next morning and not have to be anywhere or do anything! After a relaxing breakfast complete with homemade waffles, we made our way down to the shore of the American Falls Reservoir.  We could see this enormous body of water from our RV and as we got closer, it resembled an ocean, complete with waves. Noah and the dogs had a blast playing on the beach and splashing in the water.

Later in the day we found a giant grass field and a playground. We set up some cones and played a game of soccer. After the game, Noah and I played on the playground while Alex made his way down to “three layers” which was just a short walk from the park. Three layers is what the locals consider one of the hottest fishing spots in town. It’s located on the Snake River right before the dam that separates the river from the American Falls Reservoir. Despite it being a popular fishing spot, we had the whole place to ourselves. In addition to catching two Trout and one Bass, we were given quite a show. The fish jumping for flies while the setting sun rays danced on the surface of the river was quite a site to see.

Our second and final day in Idaho led us to to the hidden gem of Lava Hot Springs. This adorable little town is nestled in the rolling hills approximately 25 miles outside of Pocatello. Prior to taking a dip in the therapeutic hot spring, we walked the dogs down by a beautiful river which was complete with mini waterfalls. The leaves had already started turning colors which gave the illusion of a giant van Gogh masterpiece. The cool temperatures allowed for the pups to comfortably hang out in the truck while we soaked in the tubs for a while. Our day at the Lava Hot Springs led to evening back at our fishing spot. Unfortunately we did not catch any fish but we did enjoy a second performance of flying fish and dancing sun beams. After a quick stop at Ken’s Market, our night concluded with linguini and clams while we watched our RV classic feature film, The Goonies. 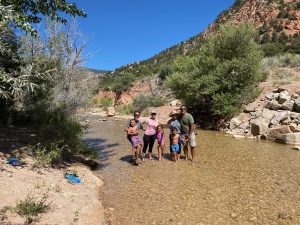 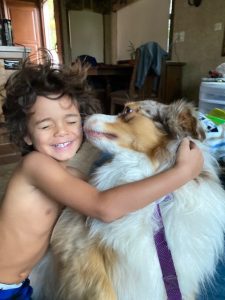 Dogs on the Go!